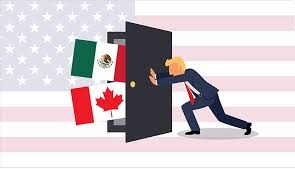 Could President Trump Really Pull the U.S. Out of NAFTA? Basic FAQs

Isn’t NAFTA a treaty that cannot be unwound unilaterally by a President?

Could the U.S. pull out of NAFTA?

Who is authorized to give notice on behalf of the U.S. to withdraw from a trade agreement?

Could the U.S. President unilaterally pull out of NAFTA without Congressional approval?

Most likely, yes. There are two prior cases involving U.S. presidents who terminated a treaty by executive decree. One case involved President Jimmy Carter’s executive termination of the Sino-American Mutual Defense Treaty with Taiwan in 1979. The second involved President George W. Bush’s withdrawal in 2001 from the Anti-Ballistic Missile Treaty. In each case, when the President’s authority was challenged in a lawsuit, the court dismissed the case as a “nonjusticiable political question.” This doctrine of constitutional law holds that certain matters are really political in nature and best resolved through the political process rather than by judicial review. In addition, Section 125(b) of the Trade Act gives the U.S. President additional authority to revoke any earlier presidential proclamations implementing U.S. tariff reductions under a free trade agreement. Accordingly, if a lawsuit was filed as to whether the U.S. President had the power unilaterally to terminate NAFTA, it is likely that U.S. courts would dismiss the case based on the “political question” doctrine.

Would tariffs rise automatically if the U.S. withdrew from NAFTA?

Not automatically. If, after providing the requisite six months’ notice, the U.S. withdrew from NAFTA, the President would, effective upon such withdrawal, issue a new proclamation imposing tariffs on goods imported from Mexico and Canada at the preferential rates granted to most-favored-nations (“MFN,”) which rates average approximately 3.5 percent on most items.

Could the new President impose additional duties on goods from Mexico and Canada?

Section 125(e) of the Trade Act provides that existing U.S. tariff levels normally should remain in effect for one year after termination of a trade agreement. However, the President also has authority to raise U.S. duties after terminating NAFTA, but these increases are capped at 20-50 percent higher than the rates previously in effect on January 1, 1974. If a President wanted to raise tariffs more significantly, such as imposing 35 percent tariffs on goods from Mexico, the President might be able to do so by invoking other statutory authority under the Trade Act and other acts of Congress on grounds of unfair trade practices, national security, and other similar threats.

Notably, these grants of authority made by statute were intended originally to give the President broad authority to respond to countries that violate trade agreements or discriminate against U.S. companies. However, it would be difficult and very time consuming for anyone to challenge, in a U.S. court, the underlying legal basis for the invocation of these provisions by the President.

What is likely to happen?

Moreover, while campaigning, President-elect Trump stated his primary goal was not to withdraw from NAFTA, but to renegotiate the terms of NAFTA and other FTAs. Accordingly, using the threat of withdrawing from NAFTA would provide President Trump with leverage to negotiate amendments to NAFTA that are more favorable to the U.S., such as obtaining certain job protection assurances. To get even more leverage, President Trump may also seek to negotiate a separate deal with Canada.

However, certain actions, particularly those relating to U.S. companies, would require congressional approval – for example, if President Trump were to seek the authority to sanction (on a monetary basis or otherwise) U.S. companies moving production to Mexico.

What should companies do to prepare for any changes?

Both the Mexican and Canadian governments have already indicated their willingness to meet with the future Trump Administration to discuss these issues, but at this point in time, before President-elect Trump takes office or at least makes some more appointment and announcements, it is difficult to predict precisely what will happen.  Also, in addition to possible changes to NAFTA and other FTAs, the new Trump Administration may make some policy changes to the U.S. Government’s procedure for vetting foreign acquisitions (CFIUS). In summary, the situation is highly fluid, and for this reason, Miller Canfield is giving up-to-date advice and counsel to its clients on a regular basis.